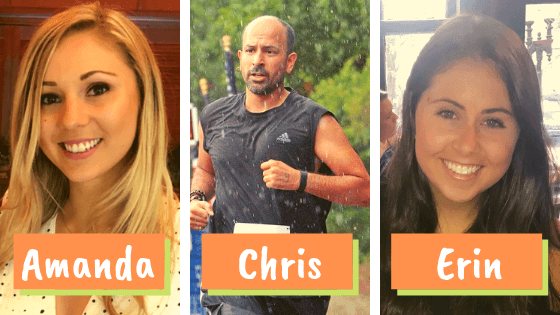 The Samaritans 2019 Boston Marathon team continues to astound with nearly $150,000 raised toward our team goal of $160,000 and one month to go! The dedicated runners on this team are loss survivors, volunteers, and folks who have benefited from our programs and services. Each month leading up to the big day, we’ll be highlighting members of our outstanding team. This month, Amanda, Chris, and Erin R. share how they’re preparing for the 2019 Boston Marathon!

What does your training schedule looked like? Is there a run that has been particularly memorable?

Chris: I wasn’t a frequent runner going into this, so I first focused on doing a weekend run every week to build up my endurance and improve my running posture and breathing. Once I was doing that on a consistent basis, I started working on some short runs during the week. It was hit or miss due to work and family schedule, plus a boot camp class I would go to regularly throughout the week. As of January, I’ve been more diligent getting the recommended three runs per week in, at least based on the John Furey running program. Usually, it’s five-mile runs twice on weekdays, and a long run on the weekend, incorporating hills as much as possible. I don’t know if there’s a single run that’s been memorable but the most rewarding thing so far is a change in mindset. Early on, the idea of regularly running five to seven miles would feel like a really difficult chore, but as the miles have gotten longer and my stamina has built up, those shorter runs have become a relaxing and welcome break to the day. It can feel refreshing. I never thought I’d feel that way about running.

Amanda: I am currently training about five days a week with two strength training days, two shorter runs (four to six miles), and one longer run (ten+ miles). Every Saturday is memorable for me as those are my long run days. I am continuously amazed when I’m able to run a distance that I’ve never ran before!

Erin: During the week, I’m taking classes at MyStryde two or three times a week, and cross training once or twice a week, and one of those will usually be boxing (such a good workout!). I run with the Furey 26.2 group on Saturday mornings for our long runs. My most memorable run this training cycle has been the Hyannis half in February. It was rainy and windy, thankfully not as bad as Boston last year, but brought back memories and made me really excited!

What sort of community have you built with other folks participating in the Marathon?

Amanda: Since the Furey training program works with 23+ charities across Boston, it is a great way to meet different teams training for the Boston Marathon. We meet every Wednesday and Saturday and it’s nice seeing familiar faces every week for our hill and long runs. Some of us even follow each other on the app Strava to track our runs throughout the week!

Chris: The Samaritans team is great. I live out in Holliston though, so it’s hard to get into Boston to meet up with them for a run or attend events, but I stay plugged in on what they’re doing and how their running and fundraising is going via Facebook. In addition to Samaritans, I’ve been fortunate to have a supportive group of running friends nearby. I’ve had huge support from John Caruso, a neighbor of mine who has run 20+ marathons. He’s taken me under his wing and shared so much of his experience and knowledge with me during our runs. Friends from my boot camp class have also been super supportive, offering advice during class or doing runs together on a weekend. I’ve met up with friends at work who are part of a running group, which has been a good motivator to get out of bed on some cold winter days.

Erin: I love running for Samaritans because everyone has such a personal story with suicide and when we share our stories, I feel instantly close to these people who are otherwise strangers (at least in the beginning)!

How have your family and friends reacted to the news about your running?

Erin: They love it. I’m seriously so lucky to have such supportive friends and family. They have been so generous with their donations two years in a row, with no hesitations, helping me crush my fundraising goal.

Amanda: My family and friends are incredibly supportive. I was raised in Austin, went to college in Fort Worth, and now live in Boston. It’s great to see friends across the country come together for a cause that I hold so close to my heart. Not only did they help me accomplish my original fundraising goal, but several friends have also reached out with similar losses or struggles in their life. These conversations help continue to spread awareness around suicide and break down the stigma of mental illnesses.

Chris: Everyone has been supportive. People have been very generous with their donations to help me hit my fundraising goal, and many have thanked me for sharing my story and why I’m running for Samaritans. It’s led to a few friends opening up and sharing some of their own personal stories or struggles about depression. These exchanges have been the most rewarding experience for me in this whole journey. The physical development is great, but these 1-on-1 connections and dialogue offer me a lot of inspiration.

How are you feeling with just a month to go?

Erin: I’m ready (and praying for better weather!). I can’t really explain how excited I am. Running the Boston Marathon for an organization like Samaritans is special. It’s emotional and we all run with really powerful stories so I’m excited to bring these emotions to the starting line! This training cycle flew by.

Chris: Well, I recently had a bit of a setback where I was bedridden for a solid week due to the flu, then a bad cough the week after, and then a volunteer vacation the week after that, which put a dent in my training routine for most of February. It’s been stressful since the Marathon isn’t that far away, and physically, I could feel I had lost some endurance and strength. Over the last two weeks though, I’ve been able to work my way back up to a 15 mile run, which is the farthest I’ve ever run in my life (so far), at a pace I was pretty happy with. So physically and mentally, I feel like I’ve recovered and am eager for April to come!

Amanda: My first hotline shift at Samaritans was on March 4, 2018 and I never imagined that just one year later I would be training for the 2019 Boston Marathon with the Samaritans team. I’m honored to run one of the greatest marathons in the world on behalf of Samaritans and more importantly in my father’s memory. Let’s do this!

To support the 2019 Marathon team and learn more about each runner’s story, please visit our team’s CrowdRise page.

Leading up to the big day, the runners are hosting a number of fundraisers which can be found on the Upcoming Events section of our homepage. 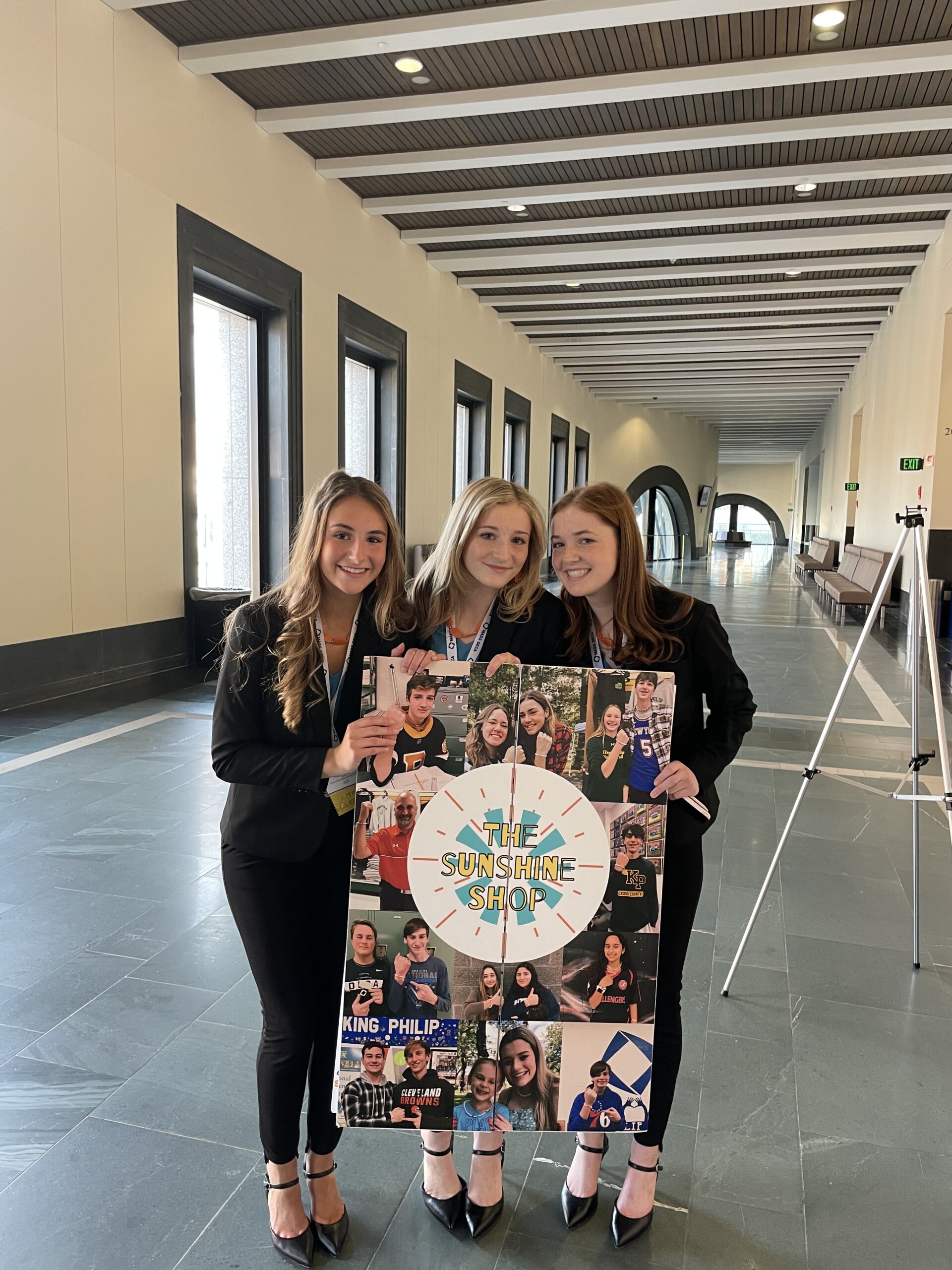 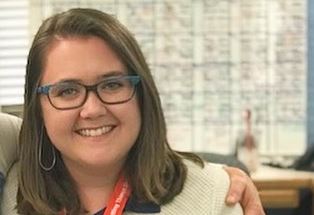 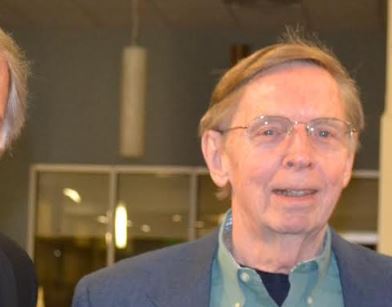