“Weebles Wobble, but they don’t fall down.” Carrie Howder tosses her head back and chuckles at her joke about the popular 1970s toy.

“I just don’t give up,” Carrie says. “I’ve always been that way. I’m competitive, so that probably has something to do with it. But I’ve faced a lot of struggles in my life, and I’m still standing.”

One of the most difficult chapters of her life began in 1992. One month before she was to be married, Carrie’s father lost his life to suicide.

“My whole life fell apart when that happened. My brother and I were literally picking up an urn for my father’s ashes on the same day that we were going to buy my brother a tux so that he could walk me down the aisle. I ended up going through with the wedding, but I shouldn’t have because I wasn’t in my right mind. I was divorced within 13 months.”

Carrie says that after her father’s passing, she initially tried to connect with a grief support group in California where she was living, but she describes herself as feeling like a “basketcase” for years and years afterward. Carrie says that her life didn’t start looking up until she accidentally stumbled upon the Samaritans Annual 5K Run/Walk for Suicide Prevention in 2011.

“It’s really crazy because I never ran 5Ks before. I got invited to run the 5K with my brother and his wife because it was close to where I lived in South Boston. And it ended up being the Samaritans race. It was totally coincidental. It was meant to be.”

At that race, Carrie finally found the support and community that she had been seeking for so many years, and she decided to attend a SafePlace meeting after her first 5K.

“So many people say, ‘It saved my life,’ so I don’t want to say what everyone else says,” says Carrie. “But it really did save my life. I’m much healthier. My own depression is stabilized.”

So when Carrie decided to return to run the Samaritans 5K in 2012, she decided it was time to do something even bigger than run the race alone.

“I remember being at the starting line and feeling alone even though I was with all of these people,” Carrie says. “And it made me realize that I wanted to start a running team.”

Ten years later, Carrie’s “Team Chowder” is one of the longest-running teams participating in the annual Samaritans 5K race. Starting with a team of four, Carrie has grown her team to as big as 30 people over the last decade, and she raises $4,000 – 5,000 for Samaritans each year – and in some of the most fun and creative ways!

Carrie has held Zumba and Orange Theory fundraisers at the gyms she attends. She has planned and hosted a dinner at a local restaurant and secured 50 donated raffle prizes, including an iRobot Roomba, Celtics tickets, and donated paintings from local artists. Carrie is even working on a future “Carrie-oke” fundraiser to bring people out to raise money while they sing the night away.

When asked why she runs, Carrie says that her motivations have evolved over the years.

“At first the people on my team were there to support me and my dad. Then we started running to break the stigma of suicide. And now many people started joining Team Chowder because they are running for somebody,” Carrie says. “As for me, I started by running for my dad, but I realize that I’m really running for me now – because I finally have a positive way to heal.”

Carrie is thrilled about the Samaritans 5K being in-person this year after a two-year pause during the pandemic. She says you will find her team under the blue awning proudly displaying their traditional “Team Chowder” sign.

Carrie admits that running the Samaritans 5K is a day full of emotions, and she says it has been one of the best decisions she has ever made.

“I warn people that running for someone can be emotional. You are excited and happy because you see so many people coming together. Then, you catch yourself feeling guilty for being happy. And then you are back to being happy again because you remember that you are making a difference. If you have lost someone, I would encourage you to run this race because it helps you realize you are not alone. It brings a comfort to your heart that’s simply hard to describe.” 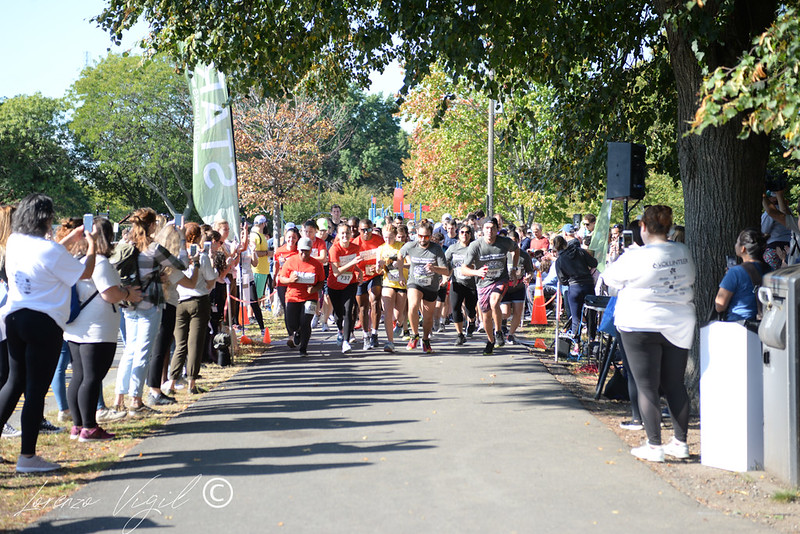